skip to main | skip to sidebar

CancerCompass: RE: Bile Duct Cancer Year 2010
A post I recently made on another cancer blog. Since I've been so lax here, I thought I'd post it.

I know my situation sounds weird, but I have heard of a couple other people with similar experiences. At the cancer center I go to they have one other person with a similar experience. Definately NOT the expected path for bile duct cancer!

I was diagnosed with cancer of unknown origin first. During a CT scan for my lungs (I had a persistent cough) they found 4-5 tumors in my liver. They did a biopsy and came up with bile duct cancer. Clearly it was not blocking my bile duct as I had no symptoms of any kind.

I went through several chemos including gemcitibine, cisplatin, and others I can't think of right now. Since my tumors are inside my liver, that means it's intrahepatic, and not a good candidate for surgery. Having multiple tumors doesn't help. So anyway, later on they did another biopsy and sent it for some genetic testing and comparisons with other kinds of cancers. Meanwhile I was on oral chemos like Zeloda and lately Nexavar.

The test came back still unclear as to type of cancer, but the best match was liver cancer mixed with bile duct cancer. It's called cholangio-hepatic. No one really thinks I have liver cancer as I've never had hepatitis, my liver functions are great, no cirohsis (sp?) nothing to indicate any damage to my liver. So.... here we sit.

I've had CT scans every 3 months from neck to pelvis for 3 years now. Nothing grows (much), nothing shrinks, it just sits there in multiple tumors ocassionally causing me some pain but that's it.

Does that make things any clearer? Still the best guess is bile duct (mixed with some liver cancer cells) but clearly slow-growing.

I'm off all chemo right now, and will be for a second three month stretch until September when I have another CT scan.

With 2 biopsies now they are sure it is cancer, so no reason to go there (too bad!) it's just an oddly progressing type I guess. Someone else who chats on these boards has shared similar experience to mine, but I haven't heard from them for awhile.

It will be exactly three years on August 1st. :) 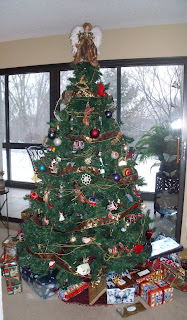 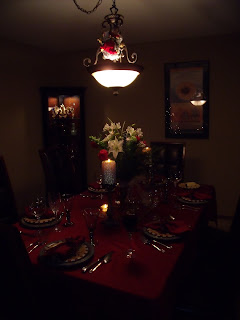 What with the holidays and all, it's been awhile again.
I've had an interesting turn of events!!!!

I went completely off the Nexavar in Nov because it just kept bugging me. A constant sorta nausea, yucky stomach, itching, mild hair loss and didn't feel like eating much but chicken noodle soup. In hindsight it wasn't "That" bad, but I'd been so lucky with side effects that it really bothered me to feel so tired and ill. Anyway, they decided that I'd taken "enough" Nexavar that the CT scan coming up in Dec should give some indication if it was working or not, and that we could decide what to do from that. I was really pushing to try something different like chemo-embolization or heat or freezing the tumors... or something!

Ok, so the results came back and AMAZINGLY it showed some shrinkage!!! Not a lot, and apparently here and there, but I have not EVER showed ANY shrinkage in 2 1/2 years!!!!!! I've asked to have a copy of the entire scan report mailed to me so I can really go over it myself, but it's not here yet.

So..............I'm back on Nexavar again.. Not happy with that, but HEY! so far it's the only thing that has done anything for me, so I'm approaching it with a bit of a tougher attitude. I got back on here and some other cancer sites and realized that as far as negative results from treatment, there's a LOT worse than I've experienced so far and with a little proof that it might DO something (after so long w/no signs) I am motivated.

Anyway, I'm only taking one pill a day (1/4 dose) for two weeks and then we'll meet and see how it's going. So far it's been one week and besides itching I'm doing ok. I can see now how the stomach problems go - I HAVE to have food in my stomach during the day - mini meals - or I get a sick feeling like a bombshell. That's not my meal eating style at all, but I've stocked up at work with soups and crackers, applesauce, etc. and that seems to help.


Went home to Minnesota for Christmas week and had a great time with my sister and brother and his family. 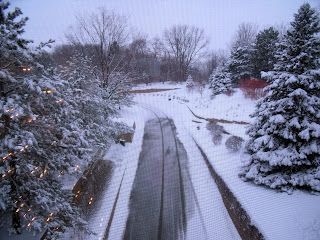 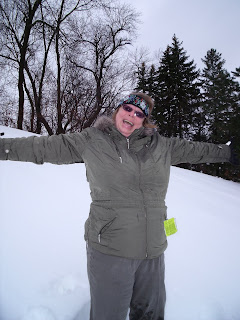 Couldn't BELIEVE all the snow, but it was fun. Back in Arizona it's been in the low 70's so that's nice too! :lol:

So much for that thought 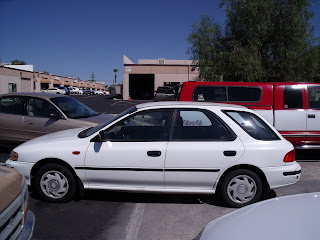 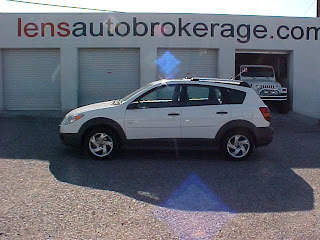 Update
My 1993 Subaru died! Right in the middle of an intersection! Had to get a new(er) car, so I picked out a 2008 Pontiac Vibe. You can see from the pics that they sure look similar. The Vibe is very nice though, good gas mileage, safe car and kinda cute!


Early September 2009 I had my latest CT scan, after a summer off of all treatment.
Really hoped to continue THAT situation, but unfortunately they detected some growth.

I still don't know exactly how much, but bottom line they explained that there's been "enough" growth since day one to now feel I should go back on chemo. Pretty devastating news.

We're trying Nexavar - an oral chemo used for kidney cancer and recently approved for liver cancer. Since I "sorta' have liver cancer they think it might do some good. We'll see. After the 1st 2 weeks I was up to there with side effects. Couldn't eat much, felt lousy, pain in my sides, skin rash all over and my poor head! I couldn't even touch it with a comb or brush, yet it itched like crazy!

So they pulled me off it entirely for a week and now I'm back to taking 1/2 the regular dose. 2 pills/day vs 4/day. So far so good, but it's not even been a week yet.

Bottom line I guess is that I'm back in it again. I'm praying that everything stays as slow moving as it has been and that I don't get sick from the cancer itself.
We'll see! Best to all
Patti
Posted by PattiB at 1:58 PM 6 comments:

CancerCompass: RE: Unknown primary cancer site
Response I wrote to some people at cancercompass.com
Posted by PattiB at 1:58 PM 3 comments:

I've been remiss - on chemo vacation 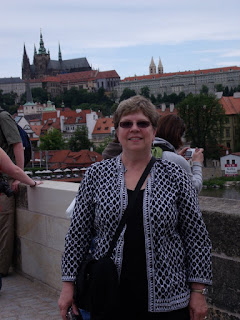 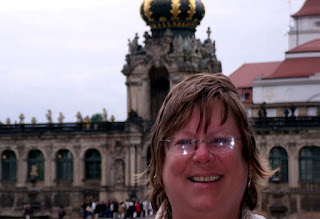 I see I've not blogged for a long time! wow!

My last post was about the genetic testing they did, and that nothing really new came from it except that they eliminated all sorts of "other" cancers that now it is definitely NOT. Ok, so what is it?

They have a name for my cancer now (after 2 yrs!) At least this is the latest incarnation. It's called CholangioHepatoma (means part liver & part bile duct cancer, but all mixed together in each tumor). If I thought bile-duct cancer was rare, this really takes the cake! Having two kinds of cancers in the same tumor is quite a stunt I think.

Regardless, my Oncologist says that he thinks I am acting "dormant". Meaning, as we've been told forever, nothing is growing (much)and nothing is shrinking at all despite 4 different Chemo attempts and a year of chemo pills. The good news of that is that I am on vacation from chemo. I've not had anything all summer!!!!! Now, in September I'm feeling sorta 'normal'? Better, anyway. At the end of the month I have a CT scan scheduled and will meet with my Onc 1st week of October.

Emotionally or mentally, this has caused a change in my attitude. I've found myself doing things that assume I'll be around for awhile. I'd ask Dr. Dragovich if I could believe from his comments that my prognosis could be for three years? and he said yes. Now the problem is... did he count these first two????? :) I'm gonna say Yes!

So, I've been "feathering my nest", purchasing some actual furniture accessories, etc. I took the vacation to E Germany and Czech Republic - still owe some pictures here!!! (I forgot!) and even went to the dentist!

Now going to the dentist doesn't seem very odd, but in my mind while I knew I had some dental problems, why get into it if I'm not going to be around very long?

When I found myself in the dental chair agreeing to have a tooth pulled and making plans to get a bridge, I had a sort of bubbly champagey feeling....Wow! I must think I'm going to survive!!!! That was very strange after two years of thinking any day now I'd be down for the count.

So I'm liking this vacation and hope it lasts a GOOD LONG TIME!
Here's a picture of my sister in Prague and I in Germany.♠
Posted by PattiB at 3:01 PM 1 comment:

My biopsy analysis was pretty good,I guess. Not that they got any definite results! (AGAIN) Turns out the "best" match is that my cells/proteins/dna resembles primary liver cancer. But neither my Oncologist nor I think that fits. It Might if I'd ever had hepatitis A, but I haven't. Regardless, they eliminated all the other cancers like breast, lung, kidney, colon etc etc so even Dr. Dragovich thinks it's likely that I'll be around for a few more years at least - because it IS slow-growing whatever it is, and he's doing more research to see if it could be a combo-like cancer such as bile-duct AND liver somehow. He's going to talk to the pathologist again. Anyway, it's great news that it's not a cancer that seems to be in a hurry to do anything. More later....
Posted by PattiB at 6:14 PM 5 comments: 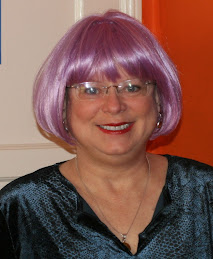 My Christmas gift from my daughter - it cheers everyone up!

PattiB
The biggest thing about me right now is that I'm newly diagnosed with Cancer. Not fun! I'm a 56 female with a grown daughter who is living in Chicago. I live in Tucson, AZ. Not my favorite place, at least in the summer! The cancer was found by accident. I'd been complaining for over a year about a sporatic cough that never stayed "gone" for long, and when it started, would give me spasms of coughing that came on suddenly and wouldn't stop. It was driving me, and my boss crazy, because I am on the phone with customers all of the time, and it sounded terrible if a cough started while I was on the phone. So, finally, a Pulmonary Specialist. agreeded to a CT scan right away, and low-and-behold she spotted these 4 growths in the top of my liver. Needless to say the cough issue immediately fell to the background and I was set up for a biopsy. I'm starting this blog because of the messy diagnosis. I can't find much of anything about cancers with no discovered "origin" and what IS said is how short an expected life span is for such poor folk. I'm hoping to see if anyone else is interested in learning &/or living with such a weird cancer.